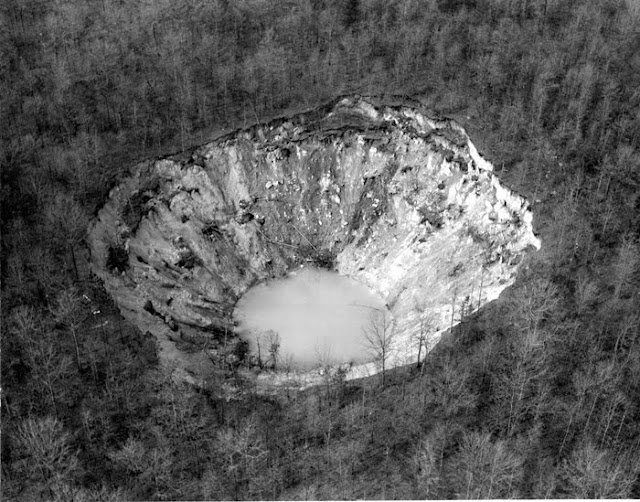 WITH a thunderous roar, hundreds of tons of dirt and rock dropped from sight, tossing trees around like matchsticks and leaving the yawning, lunar-like crater shown above. Now, after investigating the massive cave-in, which occurred last December in central Alabama's Shelby County, the U.S. Geological Survey has identified the crater as a "sinkhole."
It may be the largest yet (as much as 425 ft. across and 150 ft. deep) in a growing number of such cave-ins that have pockmarked central and northern Alabama in recent years.
Sinkholes often occur when the roofs of underground limestone caverns suddenly collapse. Government scientists are not yet sure what is causing the rash of sinkholes in Alabama (at least 1,000 in Shelby County alone in the past 15 years). **Max's note: 6000 plus occurred by 2008
But Hydrologist John G. Newton thinks that they may be the result of a natural—or man-induced—lowering of the water table. That would not only remove buoyant support from the subsurface clay above the caverns, but would also cause additional structural damage to the cavern roof by increasing the downward velocity of fresh water seeping into the earth.
The eventual result, says Newton, can sometimes be a gargantuan collapse like the one Shelby County's residents call the "December giant."
**By 1976 they knew: "Massive dewatering from mining and drilling causes increased sinkhole activity...." John G. Newton

Excerpt from Birmingham News article:
Shelby County Sinkholes, Geology, Sinkhole List
SINKHOLES MAKE SHELBY COUNTY A GEOLOGIST'S HEAVEN. BUT THAT DOESN'T SLOW ACTIVITY IN STATE'S FASTEST-GROWING COUNTY, Sinkholes Don't Sink Shelby
May 13, 2000
GINNY MacDONALD News staff writer
The Golly Hole
Besides their day-to-day existence with sinkholes, the Lawlers own what geologists say may be the state's largest sinkhole, the Golly Hole, nestled deep in the woods near Shelby County 84.
Mrs. Lawler said it was around dusk in December 1972 when she felt a rumble that gave birth to the crater: ''I didn't know what it was,'' she said.
A couple of days later, friends of the Lawlers walked the woods looking for the source of the rumble.
''They came back and said, 'You got a big hole on your property','' Lawler said.
''They walked up to the hole and said, 'Golly','' Mrs. Lawler said.
Hence the Golly Hole was dubbed.

''It was really something to see that everything had disappeared down the hole,'' Mrs. Lawler said.


The ''hole'' was 350 feet long, 270 feet wide and about 200 feet deep.
Lawler said trees looked like toothpicks at the bottom of the crater.

State geologists say it all happened in a matter of seconds.
Two becoming one
A one-acre lake is now at the bottom of the crater. Trees and bushes have grown up and down the sides of the hole. There's a second crater with a large pond in it 150 yards from the Golly Hole. The two holes are showing signs of uniting.
''We're told the pond will get bigger and bigger until the two are joined,'' Mrs. Lawler said.
Geologists say any change to the water table can trigger a sinkhole because groundwater in the rocks supports the underground limestone ''roof.'' When the water level drops, the ''roof'' can collapse.
"Many sinkholes occur near quarries or mining operations."
Posted by Max Shelby at 4:21 PM