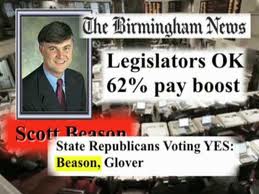 Jock types aren’t known for their mental prowess and the senator from Gardendale continues to prove that point every time he opens his mouth--jocks don’t make for good political candidates.
The pay raise voted for by Alabama legislators in the dark of the night a few years ago continues to be a sore spot with Alabamians, who are finding it increasingly difficult to get by in the present economy. Senators Beason, Glover and Sanford are tone deaf on the issue and insist on “blocking and tackling” all calls for a repeal of the gifting lawmakers afforded themselves.
Beason was on the airwaves this morning full of sports analogies for every issue he was asked about. It’s not football season, but for jocks it’s always football in their minds. And they view the world through that mindset. We say to Beason that this is not a game, a contest or even a spectator event and he shows what he is every time he enters the arena of public oratory--a real jock ass.
“Senator Beason is a bill going to come out of committee to repeal the pay raise or at least the cost of living increase?”

"Well, now you know we had to go out and actively recruit good conservative candidates to run and most of them put pencil to paper to see if they could. You know they were businessmen who were making a certain amount of money and they had to decide if they could serve in the legislature without a cut in pay or having to hire additional employees to run their businesses. So for us to cut their pay….but we are looking at being bound by the same proration Governor Bentley issues to the General Fund. It‘s hard to find good conservative candidates and we‘re lucky to have these guys on our team to serve Alabama."

Never mind that Dr. Dr. Bentley says there will be no more proration after the first painful round, effectively ending the bill offered by Senator Sanford and protecting the legislative pay increase as soon as it starts. And never mind the fact that many Alabama small business owners have had to not only deal with pay cuts, laying off employees or watching their businesses fail completely. Beason’s mind set is one of entitlement and taking care of the team while the rest of the ordinary Joe’s struggle.
He’s got the typical superiority attitude that most jocks have and the mush head logic to match.
No doubt these boys all huddled together with certain special interests and recruited like minds to run for office, and came up with a plan to make certain it would be worth it to them to do so. It’s no secret that running for office in Alabama is a huge step up from the private sector and affords endless possibilities to the office holders for goodies galore. We don’t think his explanations hold water, but he thinks they’re plausible to the voters at large, who aren’t privy to what goes on in the huddle.
One call came in from the average Joe and took Beason to task on this “Why should you and the rest of the legislators take my money, afford yourselves a raise and COI increase while my wife and I struggle? It’s not fair Senator.”
Beason wasn’t having it and It took about two milliseconds for him (and the radio host) to blame liberals for the excoriating criticism over this issue “This is being whipped up by liberal news outlets….”
That’s become the pat answer for any criticism and it’s wearing thin.
Another issue came up about development and light rail. Republicans don’t like light rail, they view it as a liberal agenda and one to be immediately dismissed based on the same. The real reason might be that the road builders don’t like it, the gang that overwhelming backs republicans for office all over the nation.
The highway 280 corridor in Jefferson and Shelby counties is a nightmare for commuters, and the biggest reason is that it was overly developed without any real plan to accommodate the huge increase in population and traffic.
Beason says that “blocking and tackling needs to happen in new development before considering alternative transportation.” That’s the same kind of thinking that has resulted in the nightmare in the 280 corridor. Build it first them we’ll figure it out. Translation--make our corporate donors happy with development before we think about the people who will be affected by our decisions because we’ll figure out some way to blame democrats for the problems.
He finished off his nonsense by returning to the field of the pay raise, and said that one of the biggest reasons for the two year college scandal was that some of the ones involved worked for big corporations and law firms. Entities that could say to the political lackey “I pay the mortgage on your house…” so you better do as I say. He seemed to clearly suggest that corporations and law firms influenced some in their actions while serving the college system that‘s been fraught with huge problems.
Couldn’t the same be said for political donors Senator Beason? Don’t a lot of politicians owe their office (and their political hides) to the large contributions from these same entities who financed their campaigns? And won’t the big donors come back around asking for a tit for tat of sorts? Of course they will.
Author Robert Lipstyle sums it up nicely on why jocks don’t make for good political candidates:

Keep in mind that the sports-industrial complex tends to produce narrow-minded, self-centered, ethically-challenged mercenaries who are deeply submissive to established authority while being fiercely dedicated to winning by any means possible.  Or as one of my old political advisors, Sam Hall Kaplan, a former New York Times and Los Angeles Times reporter, puts it: “A politician who learned as an athlete just who ultimately butters his bread can be counted on to continue to wave to the crowds while doing the bidding of the owners.” And the owners these days, thanks to the umpires (...er, Supreme Court) are likely to be unnamed millionaire warlords donating to rightwing candidates through dummy organizations and PACS that have no requirement to open their books to the voters.

Team Beason should understand that criticism comes in all forms, and these days the ever increasing noise from the stands are the voices of Alabamians of all political stripes, not just "liberal bed-wetters", another phrase he and the gang (Mike Hubbard, Sanford, Glover etc.) are quick to repeat when questioned.
They’re tone deaf and just don’t get it in typical arrogant jock mentality.
And while we’re at it, let’s replace Beason’s sporty phrase of “tee’d up” with a force of tee’d off and demand that Mr. Helmet Head and his team be a lot more accountable to their real owners--the Alabama voters. How about you jock heads do something for our economic aches rather than always protecting your own jock ass interests?

Give back the pay raise that you in effect stole from Alabamians under the cloak of darkness and unaccountability, and stop with all the damn excuses of why you think you're entitled to live better than the rest of us. Enough already.

Score in the game of credibility thus far--ZERO.

Subscribe in a reader
Posted by Max Shelby at 11:59 AM