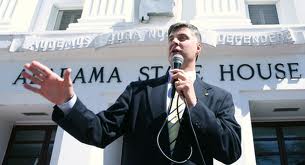 Story by: Campbell Robertson
Published on page A13 of the NYT July 13, 2011
GARDENDALE, Ala. — Newspaper editorials have called him treasonous. The N.A.A.C.P. has called for his resignation. Chamber of commerce groups and civil libertarians have found common cause in disgruntlement, and a Republican sheriff more or less accused him of being an accessory to any deaths that take place in his county.
Matt Fabian, the managing director for Municipal Market Advisors, said that for years there has been a mutual understanding among investors, bond issuers and politicians that contracts and debts would be honored, no matter what it took. The rise of Mr. Beason and other anti-tax hawks has threatened that understanding, he said.
“He is the embodiment of that trend that we worry about,” said Mr. Fabian, who has been advising investors to be wary of buying any Alabama debt.
In the end, Mr. Beason’s biggest liability may rise from his attempt in the casino case, as he described it on the witness stand, to “do whatever I could to help get the bad guys.” Already irked that he wore a wire in closed caucus meetings, some Republicans say that the fallout has seriously jeopardized his leadership of the rules committee, not to mention his future political ambitions.
Read more here


Politics and FBI snitches make for strange bedfellows. The worse the politics, the higher the snitch’s value. Usually.

Kickbacks. Treachery. Buffoonery. All courtesy of “The Candidate-esque” Senator Scott Beason and his greedy band of legislative brothers, like Rep. Barry Mask-R and former Rep.Terry Spicer-D, currently the Superintendent of Elba Schools, along with a few other assorted elected crooks officials. The bed of lies and payola being uncovered in Montgomery is messier than a two-day old hotel room during spring break, but it’s turning out some interesting couplings in Alabama politics that are sure to result in future check-ins at the Hotel Fed before it’s all done.

A few careers will crackle out and political derailment is all but certain for the main player: Senator Beason, who in his zeal to play an under-handed game of gotcha, wound up twisting in his own cover.

For those lucky enough to live outside of the state of Corruptabubba, the following video is a primer on the background of gambling in Alabama, Bingo Bob, smarmy politicians and the decades-old deceit galore that brings us to the trial now going on in Montgomery.

There are connections to indicted criminals MichaelScanlon, a former Riley press secretary, and Jack Abramoff, Riley *email pal, that are difficult to tune out. In a separate report, from Countdown on MSNBC, Senator John McCain became part of the Abramoff/Riley story with McCain acting as a 'protector' for Mr. Riley and his Abramoff tie. (*2:28 mark video link)

The trial in Montgomery is yanking back the sheets on all the dirty dealings from Goat Hill. Potentially explosive scandals, double-dealing and deceit are all being uncovered through the clandestine wire recordings--making for some 'high value' and intriguing pillow talk via the snitches that got in bed with the feds.


Senator Beason tried to parlay his value as an FBI snitch into something more.

It was a gamble that didn't pay off.

Subscribe in a reader
Posted by Max Shelby at 12:00 AM